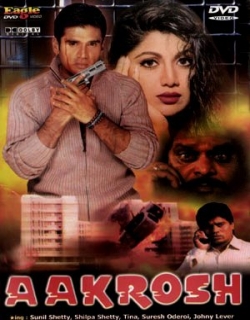 Aakrosh: Cyclone Of Anger is a 1998 Indian Bollywood drama,action,crime,thriller, drama,action,crime,thriller film released on Apr 03, 1998. The film is directed by Lateef Binny, produced by Ramesh Sharma (1961). A petty thief informs the CBI that there is a conspiracy made by four people to kill the Prime Minister. The CBI does not believe him. However, they decide to take precautionary measures and investigate the thiefs statement. But, the CBI belives the theory when thief is killed. The CBI director appoints CBI officer Dev on the job. . Devs first task to find out the four people in the conspiracy. On the basis of the thieves statement Dev belives that one of the four is a CBI officer who is passing the information to the assassins. In the investigative process Dev finds one conspirator, but he is killed. Dev gets eyewitness.Shr is tina, a club dancer, who has been the killer. Dev is trying his level best. But, he face failures because, the assassins are very intelligent and do not leave any clue of their whereabouts. Untill, one day when one conspirator makes a mistake which leads Dev to assassins mole in the CBI. But, also results in Tinas death. The traitor is killed. Before dying he reveals the name of the place where Dev can get answers to all his questions. . Dev reaches Ooty as a school teacher and comes along strange and mysterious people like school teacher Komal, Ranjeet, the take Colonel, the school Chowkidaar who looks exactly like one conspirator who is already dead. But the principal Mahendra Pratap is however a very fine and a jovial person. The conspirators who is already dead, But the principal Mahendra Pratap is however a very find and a jovial person. The conspirators try to kill Dev. But Dev is saved. He come to know that the main conspirator is none other than Mahendra Pratap the principal of the school. Mahendra Pratap manages to escape with his co- conspirator, the fake Colonel. Among the four conspirators two are alive. Dev continues his investigation with Komal who is narcotics agent and a stage comes where the Prime Minister resigns due to political difference within his party and for the betterment of the nation. The CBI thinks that the mission to eliminate the Prime Minister will be aborted because the prime minister has resigned. But in the most shocking revelation Dev comes to know that Mahendra Pratap has a personal motive to kill the Prime Minster and reason is non other than Dev himself. Mahendra Pratap is Devs father. A political conspiracy suddently changes into family drama where Dev does not identity with Mahendra Pratap as his father. But as an assassin and it his duty as a CBI Officer to eliminate any social eliminate any anti social element which can pose a threat to the country or the people of the country. Mahendra Pratap however wants to convince Dev that whatever he is doing is justified. Dev is not convinced. In the end Mahendra Pratap is killed by Dev. Check out this page for more updates on Aakrosh: Cyclone Of Anger.

Reviews for Aakrosh: Cyclone Of Anger

This page provides latest and updated information about Aakrosh: Cyclone Of Anger (1998) movie which released on Apr 03, 1998. Aakrosh: Cyclone Of Anger (1998) is directed by , produced by , starring .We have also provided 0 trailers and videos, 1 photos, 0 user reviews, and 0 critic reviews.You can review, like, dislike this movie and also can add to favorites. You can also find information on showtimes, CDs, DVDs, online rental, online free watching.