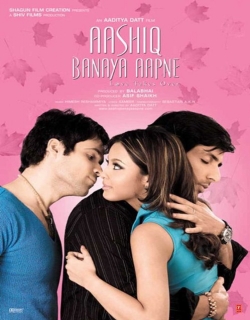 Aashiq Banaya Aapne is a story about love triangle with good music starring Imraan (Vicky) Tanushree (Sneha), Sonu Sood(Karan). Vicky is Karan's friend and stays in elhi. Sneha is Karan's friend and studies in same college and class. Karan comes from a rich family. Karan is having a party at home, and he invites Sneha in party. In the party they all sing and dance. Vicky takes admission in same college in Mumbai. Days pass and Vicky and Sneha becomes friends. Vicky proposes to Sneha. Hearing this, Karan gets disturbed, and with help of Sneha, Vicky convices Karan that he will not ditch her Karan also loves Sneha...but can't tell her. Next day Vicky, Karan and Sneha are sitting in a restaurant where Karan's friend Chandni comes. Vicky tries to flirt with her. Seeing this Sneha gets jealous and leaves the place. Vicky goes back to her. They both have a small argument but then Sneha gets emotional and then they make love. Next day Sneha's father comes in mumbai and she wants her fater to meet Vicky so she convinces Vicky but tells Karan to go with her as he is busy with some work. Karan agrees and they both sit in hotel for hours. Sneha gets depressed and she goes to Vicky's place where she sees Chandni and Vicky making love. She gets more depressed and leaves. Next day Vicky comes in the college to tell Sneha sorry but Sneha slaps him and tells him that she hates him. One day Police comes and arrest Vicky in a case of drugs. Karan calls Sneha's father. Seeing Sneha crying her father hugs dearly and tells her to forget every thing and get married to Karan, to which Sneha says yes. They gets engaged Vicky. Karan gets scared n tells the truth. Hearing truth Sneha asks him why? Karan tells her that he did this because he loves her. Vicky and Karan fight and Vicky and Sneha falls down from the window and gets admitted in hospital. Chandni dies in mistake as Karan shoots her. Police comes in hospital and arrests Karan. Sneha says sorry to Vicky and tell him that she loves him.

Karan (Sonu Sood) loves Sneha (Tanushree Dutta), but is too much of an introvert to ever express his feelings to her. Although Karan's feelings are evident to many, he is content in just seeing Sneha smile, and never gathers the courage to tell her how he feels. Vicky (Emraan Hashmi) tries to talk him out of his relationship with Sneha, but Vicky assures him that this time, he is really in love with Sneha. Karan's childhood friend. Check out this page for more updates on Aashiq Banaya Aapne. 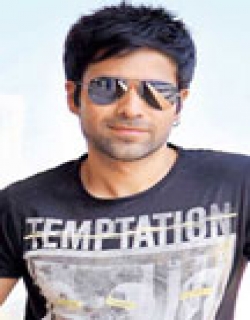 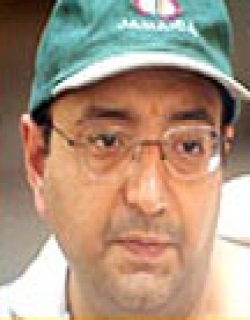