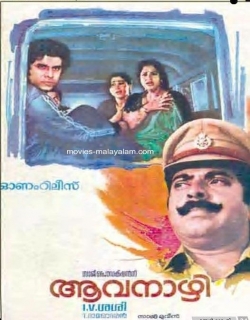 Aavanazhi is a 1986 Indian Malayalam film released on 1986. The film is directed by I V Sasi.
Balram is an honest circle inspector. Due to some failures in his life, he started drinking and is now a womanizer. He is given a task of seizing a murderer, Satyaraj. He successfully does this. But in the court, the murderer’s advocate saves him and he is set free. But, Balram decides to punish him and frame charges against him. Balram’s ex-lover is married to Jayachandran who is involved in illegal activities. Balram falls in love with Seetha who is a prostitute. Yet he decides to get married to her. Then in the story comes Radha who decides to take revenge against Balram. This is because Balram killed her brother in police custody. But this was the work done by villainSatyaraj. So, Geetha tries to explain Radha but she is not on the mood to understand. So to reveal the truth, Balram sets a plan against Satyaraj. Balram (Mammootty), popularly known as Karadi (Bear) is an honest Circle Inspector. Frustrated in his life after several personal setbacks, including a failed affair of the heart, Balram has turned to drinking and womanizing. Balram is assigned to nab Satyaraj (Captain Raju), who evaded the clutches of the police after murdering Chackochan (Paravoor Bharathan), a contractor. Balram successfully arrests him, but in court, Satyaraj is represented by Advocate Jayachandran (Sukumaran). Satyraj is acquitted by court, but Balram decides to frame in several other criminal charges pending against him. Usha (Nalini), Balram's ex-lover is now married to Jayachandran, who is now involved in several illegal business ventures. Balram falls in love with Seetha (Geetha), a prostitute, whom he decides to marry. Meanwhile, Radha (Seema), a young lady is determined to avenge herself on Balram, who she believes to have killed her brother while in police custody. But in reality, it was a handwork of Satyaraj, on instruction from Vincent (Janardanan). Falsely implicated, Balram had been suspended from police for a couple of years, but has been reinstated. Though Seetha tried to convince Radha of the truth, she is not ready to accept it. To gain her revenge over Balram, Radha decides to offer Satyaraj a safe stay away from the police eyes. Balram's open fight with Satyaraj and his "outside the law" dealing with him forms the rest of the story. Check out this page for more updates on Aavanazhi.

This page provides latest and updated information about Aavanazhi (1986) movie which released on 1986. Aavanazhi (1986) is directed by , produced by , starring .We have also provided 0 trailers and videos, 1 photos, 0 user reviews, and 0 critic reviews.You can review, like, dislike this movie and also can add to favorites. You can also find information on showtimes, CDs, DVDs, online rental, online free watching.