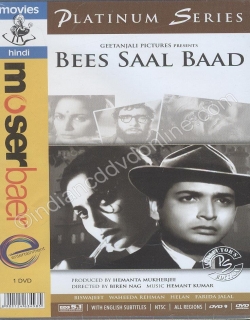 After a lusty Thakur rapes a young girl, she kills herself. Thereafter, the Thakur is killed by what the local people call the girl's vengeful spirit. Then the Thakur's son is also killed in a similar way. Thereafter the brother of the Thakur is also killed. The grandson of the Thakur, Kumar Vijay Singh (Biswajeet) returns from abroad to claim his ill-fated legacy. He is warned to stay away from the grounds that have killed his ancestors, but he intends to find out who or what is behind the killings, and hires a private detective, Gopichand Jasoos (Asit Sen). Kumar meets with Radha (Waheeda Rehman), the daughter of the local doctor, Ramlal Vaid (Manmohan Krishan), and both eventually fall in love. Then a man is found dead wearing the clothes of Kumar Vijay, and Kumar Vijay must now decide to stay away from his new residence, or continue to live there, and fear for his life everyday until death.

Suspense movie allegedly derived from The Hound of the Baskervilles. Kumar (Biswajeet) is the last in a long line of Chandangarh zamindars. He returns to his lonely ancestral manor where his father had been mysteriously killed after he was lured into the fields by the sound of anklets and a woman crying. Rumours abound of the ghost of a woman raped and killed by Kumars ancestor. Kumar falls for the local belle Radha (Rehman) and meets a gallery of dubious characters: an excon servant, a bearded doctor and a man on crutches who turns out to be a disguised policeman. The first half of the film builds up the suspense, mostly using the soundtrack according to generic conventions The plot then becomes a whodunit until the murderer is revealed: Radhas guardian (M.Krishna), the father of the woman killed 20years ago. Waheedas seduction number, associating her with the ghost, is the classic Kahin deep jale kahin dil (sung by Lata Mangeshkar). [Source: Encl] Check out this page for more updates on Bees Saal Baad.