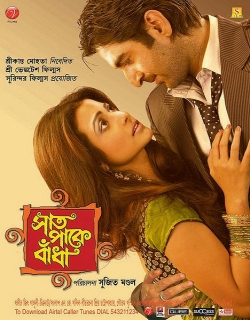 Saat Pake Bandha is a 2009 Indian Bengali drama film released on May 29, 2009. The film is directed by Sujit Mondal, produced by Shree Venkatesh Films.

Rich kid Rahul Banerjee is coerced by his industrialist father Subhankar Banerjee to marry Pallabi Sanyal. But Rahul adamantly stress for a contractual marriage. Finally the resolution is adapted where Rahul marries Pallabi, but only for a span of a single year. This one year marriage agreement may be exceeded if both of them get inclined towards each other. Pallabi falls in love with Rahul, but the nincompoop fails to grasp or evaluate her honesty and after the competition of the stipulated period Rahul decides to drive back Pallabi to her way home with the money and perks decided to be paid during the formulation of the agreement. Rahul’s father Subhankar, his friend Keshto all persuade him to stay with Pallabi, but all prayers and petitions go in vain. Pallabi gets shattered after receiving an iron hand from Rahul. She realizes that all she had received during this stint was only money which was utilized by her family members (her elder sister Sumi’s operation, her younger sister’s marriage and her brother Somnath;s career). Meanwhile the manager of ‘Rahul Industries’ and the corrupted employee Shankar plot evil against the management and swear to bring nemesis upon Rahul’s existence. At this juncture, Rahul realizes that he treated Pallabi like a commodity and falls in love with her. He goes back to her and begins to woo and win her back. Pallabi remains antagonistic, dejected and trust broken. Pallabi joins Sengupta Industries as the P.A of the Managing Director of that company. Rahul buys shares of Rs. 30 crore of that company and accumulates the position of M.D himself. Thus the estranged lovers begin a new episode as employers and employee. Rahul vociferously and vehemently attempts to win back Pallabi but fails to break the jinx. Finally when Pallabi is diagonised to be pregnant and Rahul is stabbed in his own pavilion by Shankar and his allies, the scenario takes a U-turn. The couple realizes that they are unfulfilled without each other. As the new born comes into their lives, the dejected couple re-unite for a fresh innings.

Saat Pakey Bandha is a romantic film centered on the marriage of Rahul (Jeet) and Pallavi (Koel Mallick). Rahul returns home after completing his higher studies in the UK only to be forced to marry Pallavi, a traditional girl with strong family values. Rahul has no interest in tying the knot but agrees only on the condition of it being a one year contract marriage. The plot traces the growth of love and understanding between the couple, though crack appear early in the relationship.

The movie draws extensively from Anil Kapoor-Kajol starrer Hum Aapke Ke Dil Mein Rehte Hai. Saat Pakey Bandha sees the comeback of the immensely popular Jeet-Koel pair. Both actors believe that the audience expects a lot from the film because it stars them as a married couple. This is also the first time that Ranjit Mallick has been cast in the role of Jeet’s father.

Check out this page for more updates on Saat Pake Bandha. 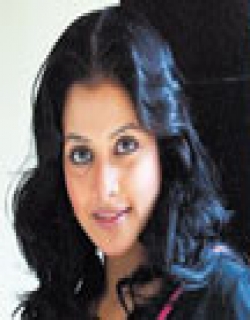