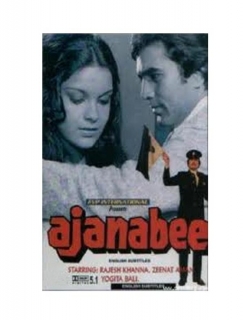 Ajanabee is a 1974 Indian Bollywood social film released on 1974. The film is directed by Shakti Samanta, produced by Girija Samanta.

Middle-classed young and dashing, Rohit Kumar Saxena falls in love with wealthy and lovely Reshmi, and both decide to get married. Reshmi’s dad, the wealthy Diwan Sardarilal is strongly opposed to this marriage, but relents when Reshmi refuses to marry anyone else. As a result, Rohit and Reshmi get married. Shortly after their marriage, Reshmi gets pregnant, news that is very well received. Then Reshmi enters a beauty pageant, and wins it - being crowned Miss India, with offers to travel abroad. Reshmi decides that she does not want the child now, but Rohit opposes this decision. Both quarrel, and separate, and Reshmi goes back to live with her dad. Shortly thereafter, Sardarilal sends a legal notice to Rohit asking for a divorce. Devastated, Rohit seeks employment, and finds it as a station master at a remote hill station. He meets with Reshmi and her dad, and is humiliated because he is poor. He decides to accumulate enough money to win back Reshmi’s love, and decides to do it quickly. This decision results in his being arrested for stealing a suitcase full of jewelery and valuables, and he is also charged with killing the owner of the suitcase - a Miss Sonia. Looks like Rohit’s dream of getting back together with his wife will remain unfulfilled during this lifetime.

Check out this page for more updates on Ajanabee.