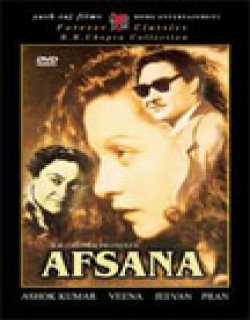 Ratan and Chaman are twins brothers who love the same girl, Meera. During a fair, all three are separated. While Chaman and Meera are found, Ratan is untraceable. Years later, Chaman is no longer attracted to Meera, but in a dancing girl named Rasily, while Meera awaits word of her childhood sweetheart Ratan, who she feels is still alive. Then the unexpected happens, Chaman gets into a fight with another man, killing him, and is on the run from the police. Misunderstandings are clarified, and the law declares this to be an accidental death, and as a result Chaman returns. But this is not the same Chaman any more. For one thing, he has lost interest in Rasily, and is more interested in Meera - could it be that Ratan has returned in place of Chaman? If so, what has happened to Chaman?

Chopras debut is a story about identical twin brothers, Ratan and Chaman (A. Kumar), seperated in childhood. Ratan, raised in an orphanage, grows up to become a noted magistrate. Chaman inherits the family wealth and becomes an arrogant playboy. The two meet as a adults when Chaman is on the run, falsely accused of murder. Chaman is on the run, falsely accused of murder. Chaman gets away by impersonating Ratan and when he dies in car crash everybody believes it is Ratan who is dead. Ratan, whose wife (Kaur) has an affair with his friend Mohan (Pran), wakes up from a drugged sleep to find himself regarded as Chaman Eventually his memory returns through the help of childhood sweetheart Meera (Veena) and happiness follows upon his fickle wifes suicide and her lovers financial ruin. Continuing Ashok Kumars association with the Filmistan crime movie, newcomer Chopras diretion was extensively comended. *.* Chaman and Raman were twin brothers. It was hard to distinguish between them-except for the scar on Ratans left shoulder. . Both loved Meera-a girl living in their neighbourhood. Meena preferred Ratan and Chaman-because the former was kind and gentle. In their childhood Meera and Ratan planned a lifetime of love. But fate, destined otherwise and the two innocent lovers were swept apart before they had gone very far in life. . Ratan was lost in the village mela and given up as dead. But Meera continued to nurse her love and waited for his return. Chaman inherited his fathers immence wealth, and it made him naughty, ruthless and hard. But he had a soft spot for Meera and he wanted her. But meera waited for her childhood lover Ratan. . Her Ratan! Fate made him Ashok-the popular magistrate of Ghorakhpur, simple and kind, with a memory on the night of the mela and he remembered nothing of his childhood. His new life was peopled by Leela his beautiful wife and his rich friend Mohan. He loved them both and found himself happy in the belief that they also loved him. It mattered little to him to see his wife and Mohan always together-he never suspected the illegal romance that was going on between them. And then one day he had to go to Mussoorie on an official business. Into the same hotel came Chaman a fugitive from justice. When Chaman saw Ratan now Ashok, with just a beard between them, he decided to foist the murder on Ashok. . We will leave you at this stage because it is difficult to go further without indulging in long details. The two brothers-so completely alike, except for the beard which Ashok wore-face each other-without knowing each others identity. Check out this page for more updates on Afsana.

This page provides latest and updated information about Afsana (1951) movie which released on 1951. Afsana (1951) is directed by , produced by , starring .We have also provided 0 trailers and videos, 2 photos, 24 user reviews, and 0 critic reviews.Afsana (1951) has received 2 rating from user reviews.The overall rating of Afsana (1951) is 40 and movie is 2.You can review, like, dislike this movie and also can add to favorites. You can also find information on showtimes, CDs, DVDs, online rental, online free watching.