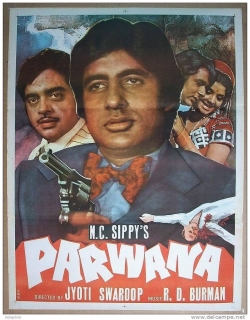 Parwana is a 1971 Indian Bollywood suspense film released on 1971. The film is directed by Jyoti Swaroop, produced by Jai Pawar.

It’s a drama cum suspense movie.Kumar (Amitabh) and Asha (Yogita Bali) are friends. Kumar is head over heels in love with Asha, but Asha considers him a very close friend. When she goes to Bangalore for a dance competition, she wins the 1st prize award and a free trip to Ooty. The organiser Rajesh (Navin Nischal) and she fall in love. When Asha tells this to Kumar he can't bear it. He is hurt and wants Asha at any cost. He goes and pleads to Anand Babu, her uncle. Anand Babu opposes the match and this makes kumar even more angry. Now Kumar plots a scheme, he kills Anandbabu, but Rajesh is blamed for this and goes to jail. But post talking with Asha, Kumar realises his mistake, accepts that he has comitted the murder and kills himself.

They say that Love is a many-splendoured thing. It comes to different people in various shapes and forms. "Parwana" is the story of one such strange love, a tale of a magnificent but terrible obsession. . Kumarsen was an artist of eminence, a taiented apainter, and a renowned sculptor and like the majority of his clan, he was a sensit- ive introvert. But no artist can hereion lay the secret of Kumars succedd. He was in love with Asha. It was a blind, unreasoning love, and it had started the day kumar had first seen Asha, when she was but a chit of a school-girl. But it was also a deep, silent love, for Kumar had never got up the nerver to tell Asha of his madness for her. . Miss Asha Varma was the only niece of a retired, jovial old pensioner, Ashok Varma, and she was truly the light of his life. As Ashok often told his good friend and neighbour, Mr.Ghosh, he was alt of theree to her. Her was her uncle. her father and her mother. . Kumar was a regular visitor to Ashoks household, and in many ways, Ashok had a soft corner for this quiet, delicate artistic man. Perhaps Ashok even had a secret desire that one day kumar would marry. Asha, but he wanted nature to take its own course. He had dicided not to influence Ashas decidion in any way, for according to him this was the modern age, where girls and boys had to make up their own minds regarding thier marriage partners. . But here Fate took a hand. For Asha travelled to Bangalore to take part in a musical competition, organised by the family of a distingui- hed tea mangate of Ooty. Asha won the competition, as well as the heart of the young te-magnate, Rajeshwar Singh. The first prize included a free trip to Ooty, and so Asha accompanied Rajesh and his family for an exciting fortnights holiday. Rajeshs mother was a discernign old aristocrat, and she made no secret of her liking for Asha while her daughter, Kamla, mischievously encuraged her brother, Rajesh in his courship of Asha. . It was a whirlwind romance, and befoe the fortnigth was over it was decide that Rajesh would shift his headquarters to Bombay, and every- thing looked rosy and bright to the young couple. When Asha returned home, Kumar immediately sensed that something was amrss. Considering him to be her good frined and well-wisher. Asha told him the entire story of her romance, and asked him to intercede with her uncle on her behalf, since she was shy to talk to the old man herself. . At this disclosure, the world of Kumar crashed around his ears, now, when it was tool late, he revealed to Asha his own great passion for her. Asha sympathised with him, but told him that she was helpless, and expected of him as a gentleman to try and get over his weakness for her. . In time, Rajesh arrived in Bombay and was given a right royal recept- ion by Asha and her uncle. Kumar tried his best to suppress his surging emotions for Asha, but as the days progressed, and Kumar was forced ot witness the growing nearness of Asha and Rajesh, he could not control himslef. A little seed of jealousy deep in his heart, grew with every passing moment till it had assumed such proportions that a violent outlet seemed the only solution. . Ones stormy nihgt, Kumar tried to hold Ashok Varma to his unsaid promise of giving him Ashas hand in marriage. But the interview ended in unpleasantness for both of them, as angrily the old man ordered, Kumar never to darken his door-step again. . Soon after Ashok Varma was strangled to death. . It was a shocking and brutal murder that hit the morning headlines, and the finger of guilt pointed unswervingly to Rajesh. A conscientios police force and a dominting public proscutor completed the work started by Kumar, and it was a foregone conclusion that the maximum penalty would be levied on Rajesh for his heinous crime against society. Check out this page for more updates on Parwana. 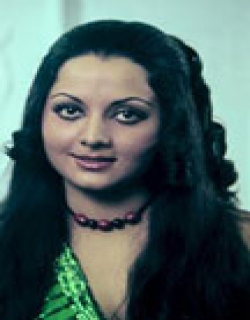 This page provides latest and updated information about Parwana (1971) movie which released on 1971. Parwana (1971) is directed by , produced by , starring .We have also provided 0 trailers and videos, 3 photos, 47 user reviews, and 0 critic reviews.Parwana (1971) has received 2.8 rating from user reviews.The overall rating of Parwana (1971) is 55 and movie is 2.8.You can review, like, dislike this movie and also can add to favorites. You can also find information on showtimes, CDs, DVDs, online rental, online free watching.